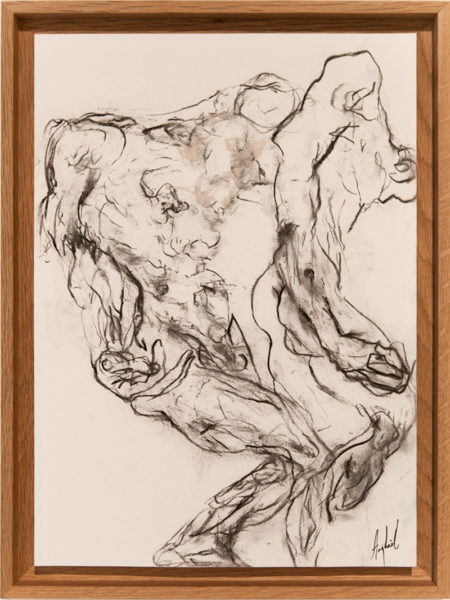 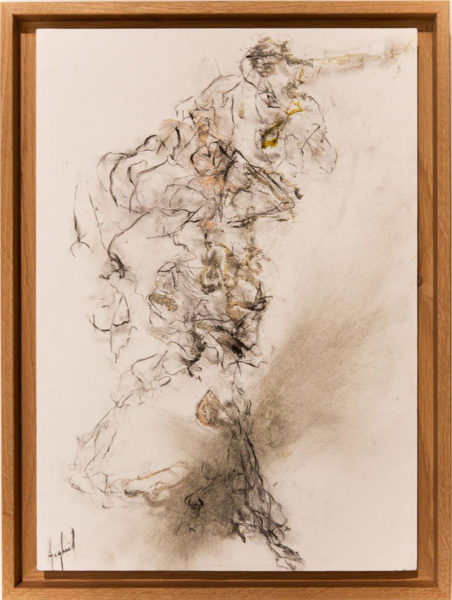 Through his work in filming portraits and commercials, Arghaël became fascinated by the human body, captured through the prism of camera eyes and editing rooms. Looking for a more personal mode of expression, he turned to charcoal and canvas to explore the rawness of human intimacy.

To hone his skills, he studied charcoal drawing with live models at the Ateliers Beaux-Arts of Paris (Gérard Venturelli’s class). From then on, Arghaël’s work will question the mystery of the flesh, frontally probing the unconscious (with every hand’s stroke) to ultimately give birth on canvas. What the artist calls « un incident pictural», a pictural incident.

In his exploration of the human body, Arghaël will soon bare it all, viscerally exposing the body within.

His charcoal now captures flesh, bones and blood vessels to their bare essence as he draws his men and women on the walls of his ‘mental cave’, the canvas lying before his eyes like a second skin.

At times, his carbon giants with oversized limbs and evanescent faces seem to be floating in space, reflecting newfound freedom in the very act of drawing.
Arghaël’s creatures rise to life before our eyes, true metaphors for the creative process. His graphic approach, similar to compositing, allows telluric flashes, amplified by warm pastels and oil painting. To capture flesh in its primitive expression, and give intemporal elegance to his bigger-than-life creations, Arghaël uses charcoal.

Encouraged by art-directors and curators he met in Berlin and Los Angeles galleries, Arghaël decides to show his work in Paris. In 2016, the Loo & Lou Gallery welcomes his first solo exhibition.