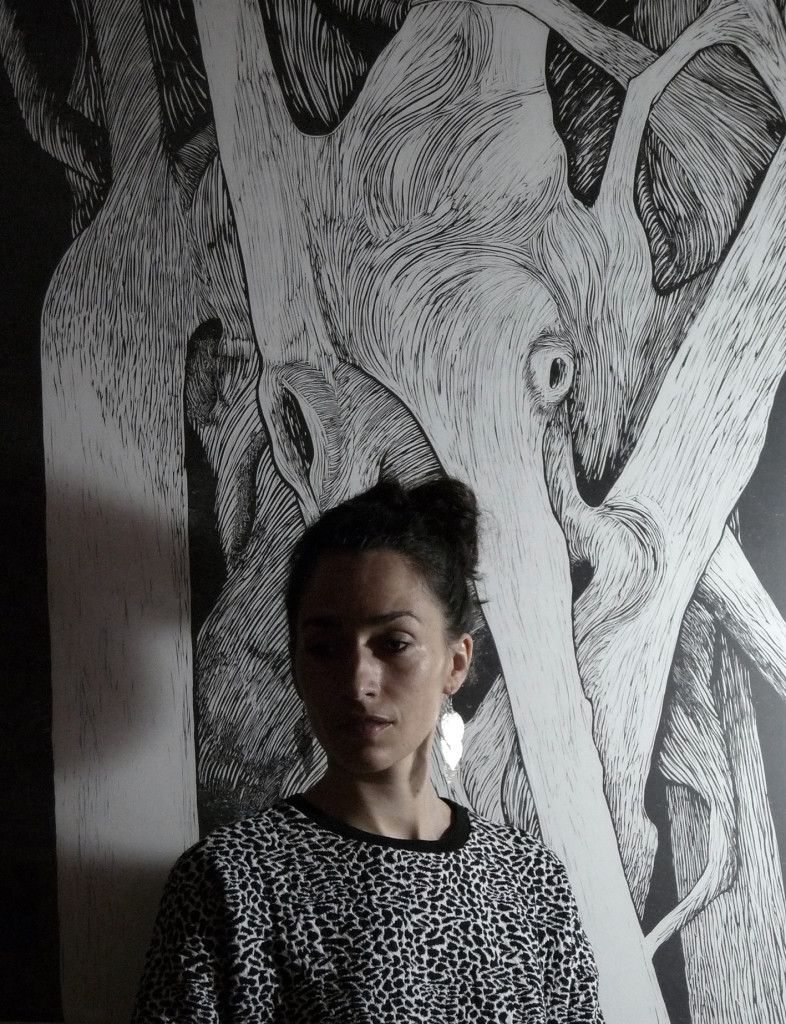 Born into a family of artists in Normandy, Hélène Damville has always drawn from nature. This passion for observing living things (animals and plants) led her to attend the Paris Museum of History where she discovered Buffon and the naturalists. She copied the plates of her masters over and over again, thus familiarising herself with the complexity of a skeleton and its joints or the networks and ramifications of the plant world, all those dry elements which are both the architecture of life and the trace of life when life has passed. In parallel to her assiduous visits to the museum, she completed her training by taking courses in artistic anatomy and obtained a Master's degree in oriental philosophy at the Sorbonne.

It is in this environment of scientific, philosophical and artistic analyses that she builds her engraved corpus.

The desire to be as close as possible to living matter led her to choose engraving as the main medium for her research. Engraving, but more precisely direct carving on metal and wood. It is indeed through the line and a vigorous stroke that Hélène succeeds in translating the essence of life in her works. She trained in copper engraving with André Bongibault at the L'estampe workshop in Chaville and then perfected her skills in ornamental metal engraving at the Ecole Boulle. André Bongibault saw her qualities and offered her a residency in China where she discovered woodcutting. This technique allows her to apprehend large formats and to give free rein to the virtuosity of her drawing in an intimate and direct relationship with the wood. She incises the epidermis of the matrix with surgical precision, which she animates with a free and vigorous line, from which emanates the energy of life. This work at the junction of engraving and sculpture corresponds perfectly to the artist who absorbs herself body and soul in this long process of transformation of organic matter. Hélène Damville reverses the hierarchy between matrix and print. Here, the print is the witness of the matrix, not its finality. Moreover, the artist confides that she is no longer interested in the notion of multiples and tends rather to make single prints, or even series of two or three copies. On the other hand, alongside her prints, she offers us her magnificent woodcuts, thus joining the artists of prehistory whose work's purpose was the engraved object.

Humans are rarely directly represented. Nevertheless, the artist suggests his presence through the juxtaposition of matrices, recalling the experiments of Rodin who liked to superimpose his sculptures in playful and surrealist devices before the letter. Thus, two inverted manatee heads give rise to a troubling evocation of vanity, which questions our finality as well as our origins.

From engraving to tattooing

For Hélène Damville, this work of the line in the epidermis of the wood naturally finds its extension in the ancient art of tattooing. For a few months now she has been an apprentice in the Parisian salon of the tattoo artist Alession Pariggiano. She who likes to work with organic material has found the artistic niche she has been looking for for years: "the skin is a magnificent support whose volume allows the drawing to become a living sculpture".