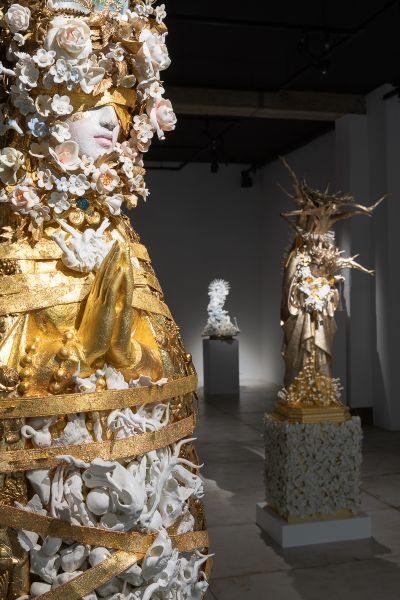 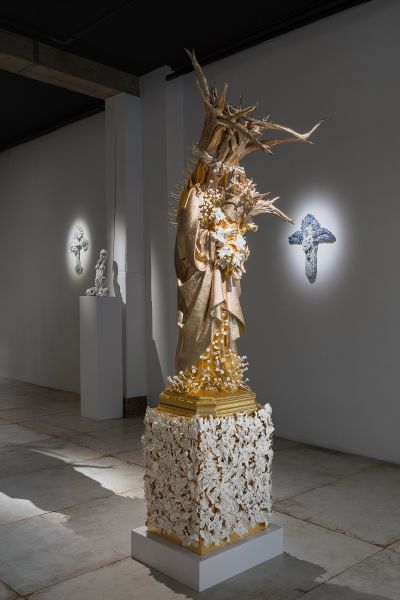 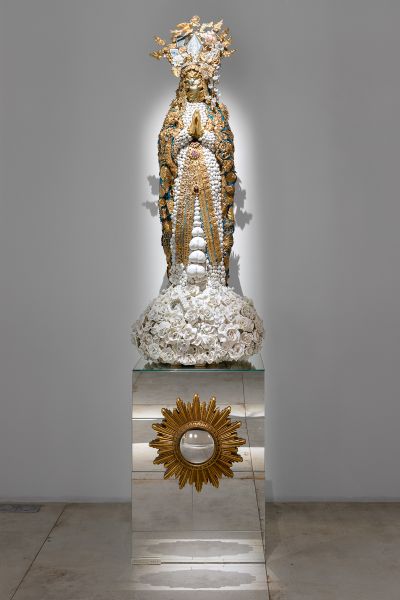 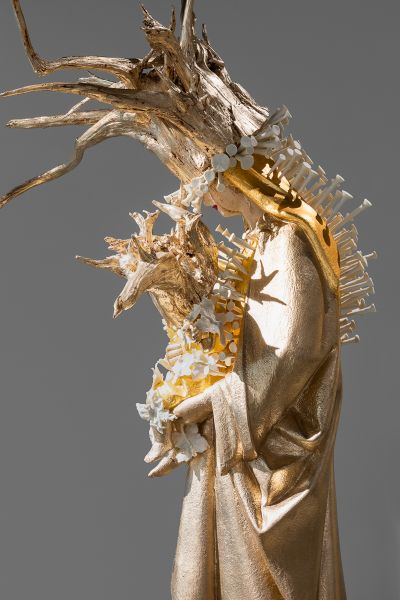 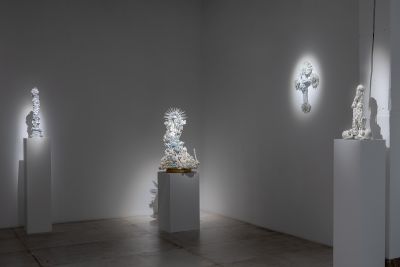 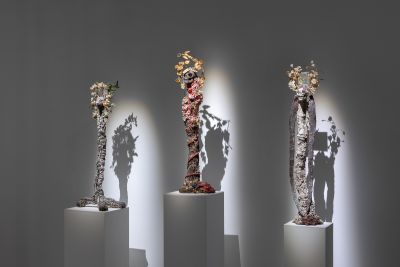 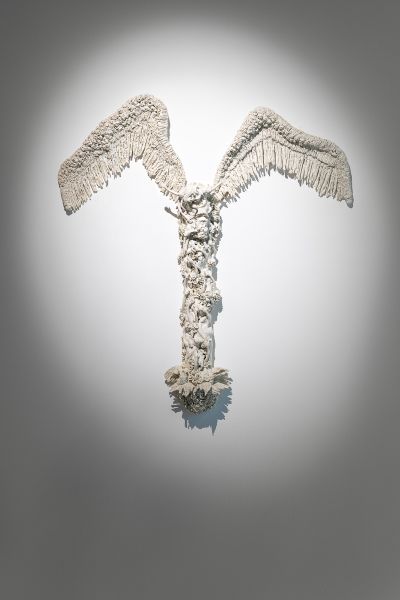 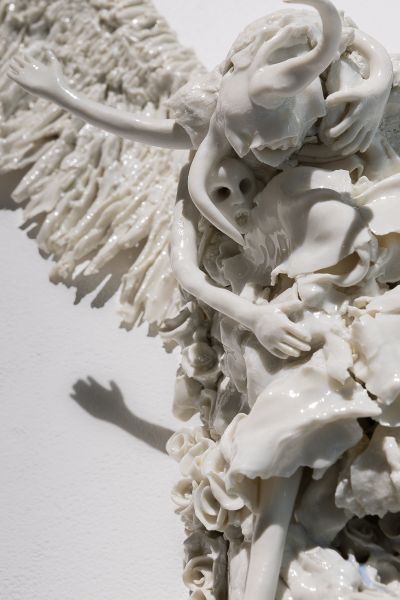 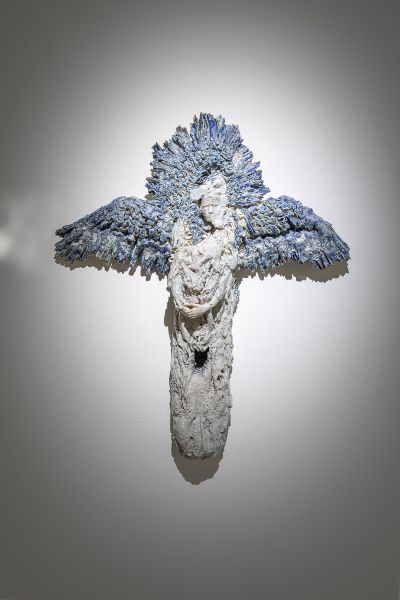 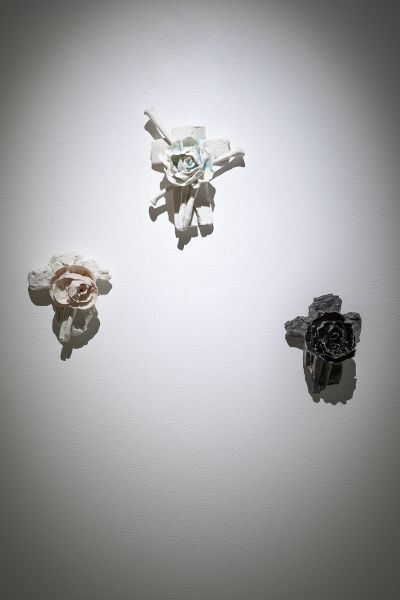 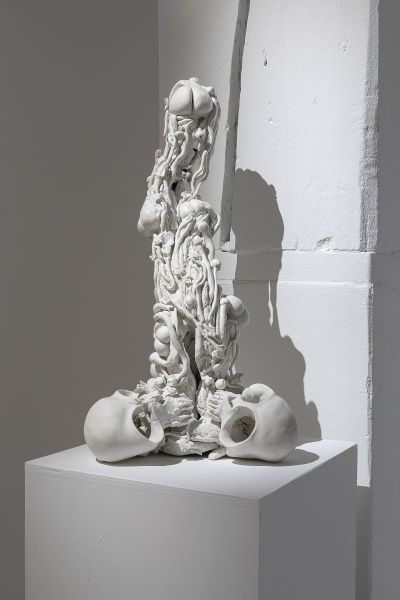 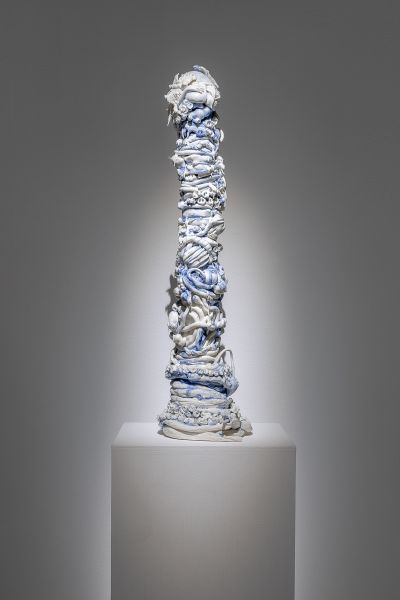 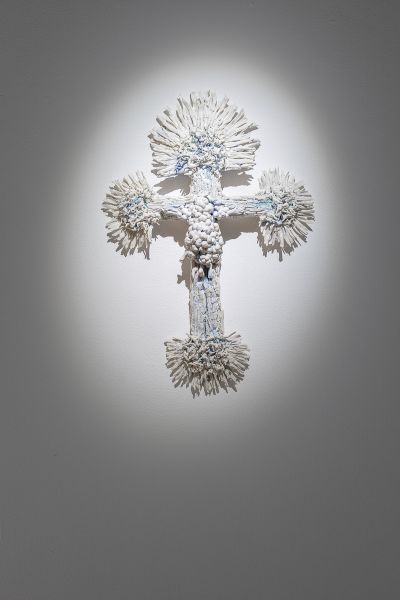 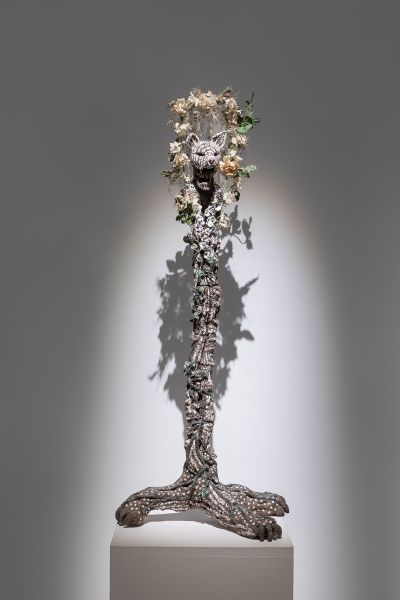 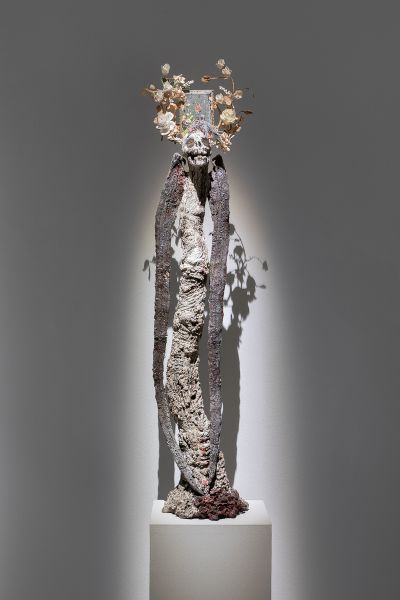 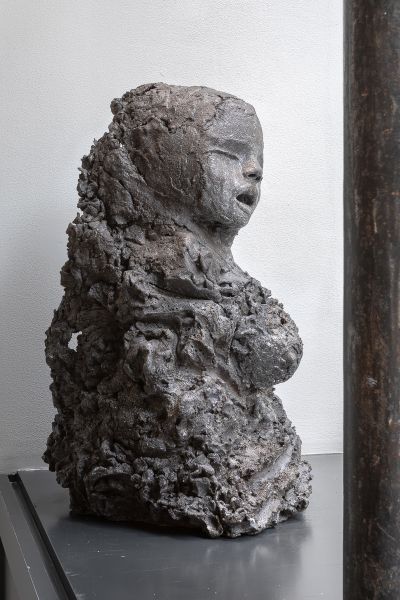 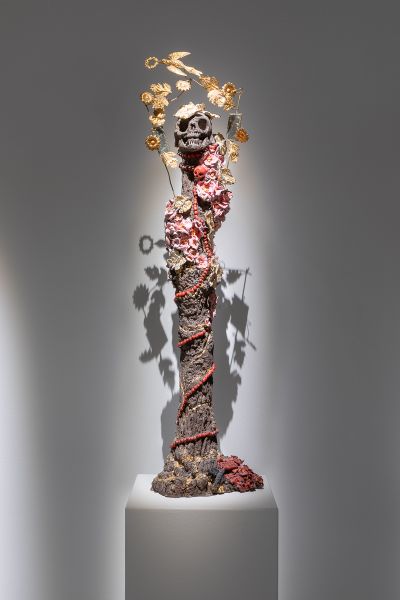 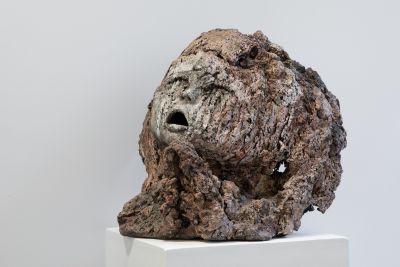 For over fifteen years, Catherine Wilkening has concentrated on universal themes that surround the female figure - birth, life, death, and rebirth. Now, her work collides with the figure of the Madonna, one of the most canonical forms in Western art. Wilkening avoids both the image of the divine and the melancholic beauty that encompasses the ideal Christian Virgin, including a contemporary and provocative kitsch approach. Instead, she proposes a series of sculptures that evoke restlessness and agitation, in the image of some other beauty - a beauty of which we do not know is the end or, as Rainer Maria Rilke once said, just "the beginning of terror which we are barely able to endure."

An intense wind blows on the Madonnas by Wilkening that fold their porcelain garments with a baroque gesture that appears to continue infinitely. Decadent and expressionist, shamanic and lyrical, these works are a hymn to a swaying and swarming sensation, an invitation to rid the urge of quick judgements.

Sometimes the sculptor creates her Madonnas ex nihilo from an erection of porcelain that she miraculously assembles - such as the bizarre piece, Le Papillon, evoking a disturbing version of Golgotha. At other times, the artist appropriates vintage sculptures dedicated to the celebration of the Virgin Mary that she diverts from their ecumenical representation to reintegrate them into her mystical and baroque universe.

She customizes them almost through voodoo, covering them with porcelain and glass, gold leaf and acacia branches. The large-format pieces impose themselves, grabbing the viewer's attention. The viewer may be enticed to change their focus as they get closer to the sculpture, discovering worlds within worlds, and infinite forms wrapped in each fold of material. The base of the sculpture Mortel Immortel, which seemed from afar to be lace, turns out to be an accumulation of butterflies. It is a baroque universe where each volute and wing contains another form, and each of the works carries within it a set of worlds that is folded inside the other. The artist additionally recovers old fragments of forgotten sculptures that she integrates into her new works.

Wilkening is looking for "the monumental in the minuscule." She conquers the grandeur of her works by exploring all the possibilities of the miniature, enveloping the infinitely large in the infinitely small. Moreover, Wilkening's sculptures cannot be deciphered through a quick glance. It is necessary to look at them for a long time to reach the meaning of their forms.

The exquisite obsessions of the artist are hidden from our eyes in a maze of the extreme finesse of the porcelain. Wilkening holds the secret! Under the apparent softness and consistency of the white enamel, the chastity of the virgins quickly crumbles under a great pleasure that arises from our souls, revealing the violence of scarifications cracking the skin of the ceramic, the abundance of floral patterns, animal bones and accumulations of small rear-ends, expression of a generosity of life that takes on all the reigns of creation. The artist's use of new materials such as gold leaf, Murano glass or acacia wood helps to thwart any quick recognitions. The eye hesitates between the aerial, vegetal, and animalistic elements. Glass and porcelain become strange fabrics enveloping a Madonna who is no longer Catholic! Through the infinite exploration of minute detail, Wilkening evokes certain spiritualist artists that obsessively operate as miniaturists on immense formats, folding and unfolding their composition as they advance, practicing a form of automatism. The sculptures are sometimes worked for hundreds of hours, showing a certain asceticism from the artist. Hence the mantric and hallucinatory dimension of some of these pieces that were born in the isolation of confinement. The sculptor made this constraint her own as the expression of a happy and protective solitary retreat where she was able to concentrate and intensify her practice.

This exhibition, Les Chemins des Délices, witnesses the overabundance of an unfulfilled and restless life, taking ever further without the slightest bit of rest, the work of an artist who, in the figure of the Madonna, recognizes her fellow man, her sisters, and the mystery of fecundity and creation. 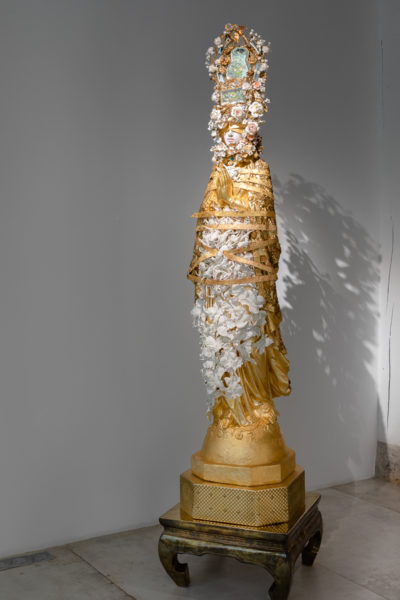 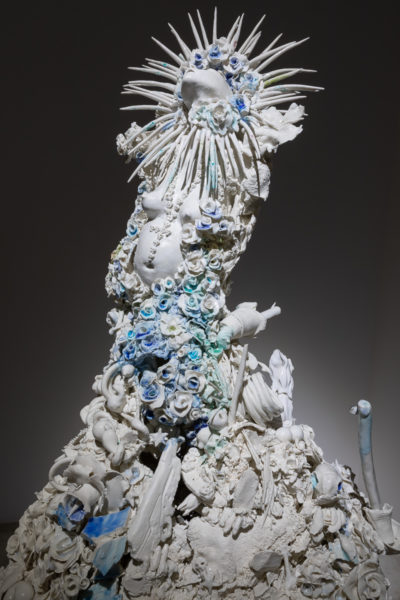 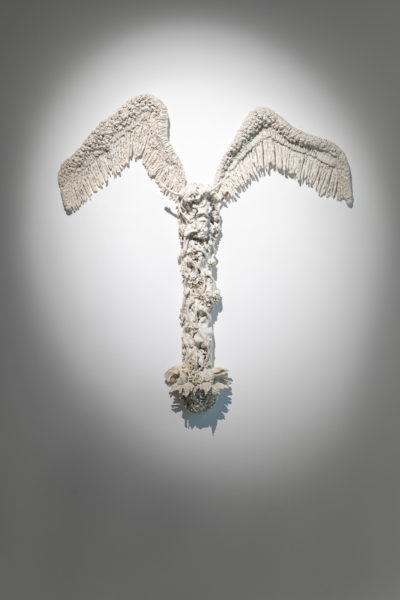 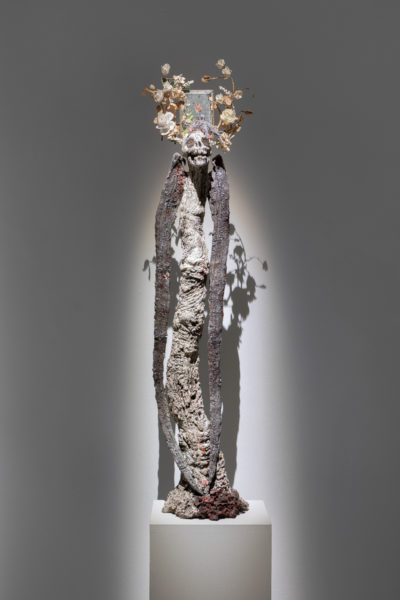