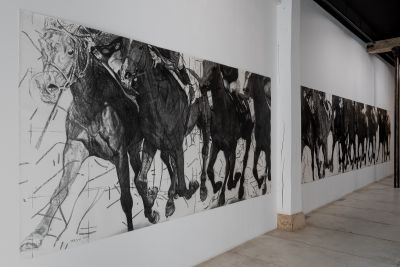 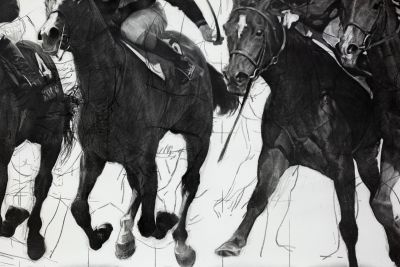 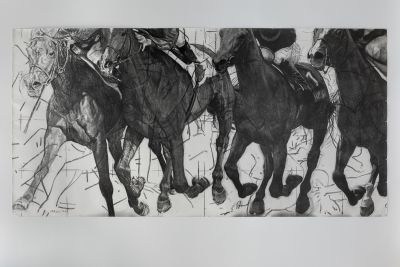 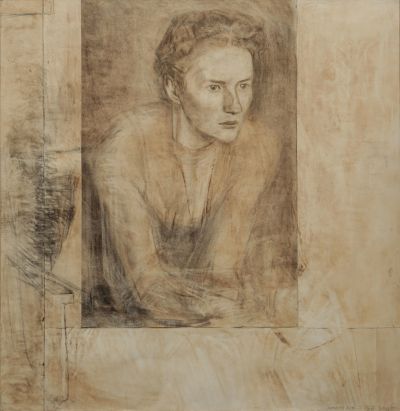 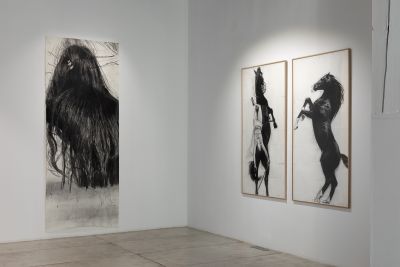 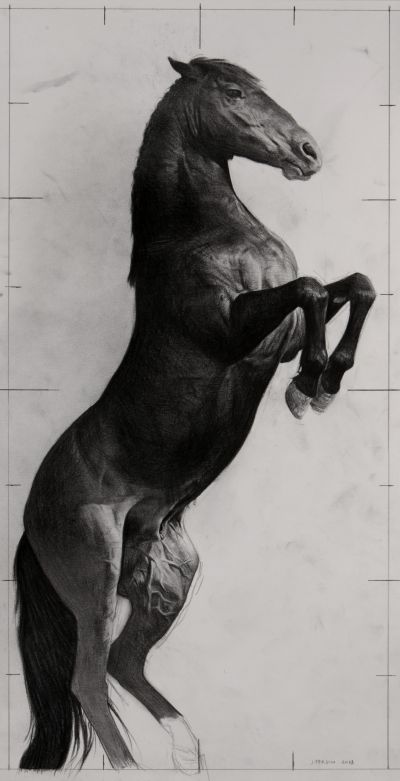 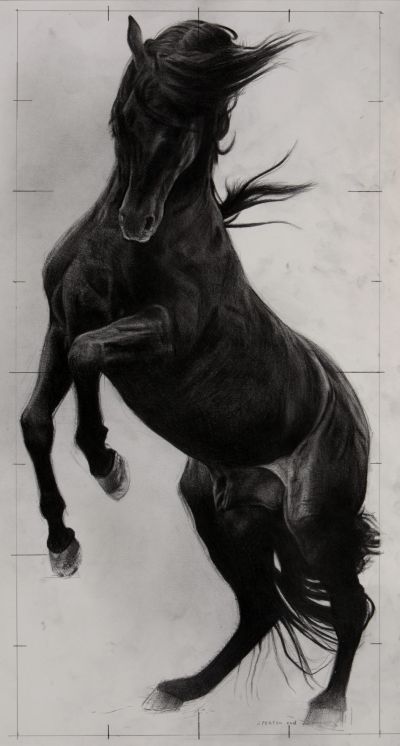 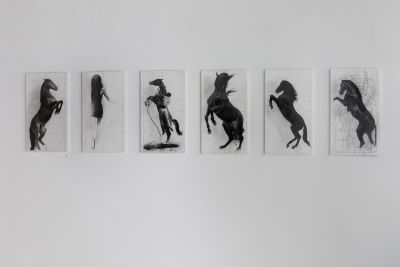 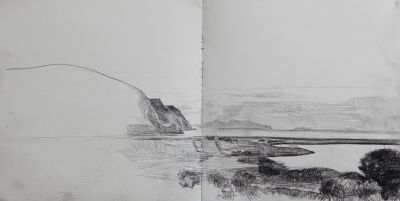 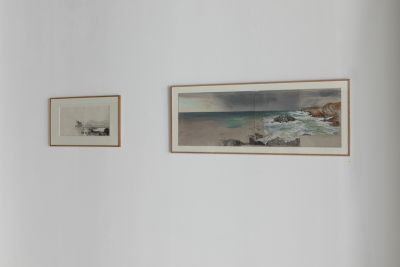 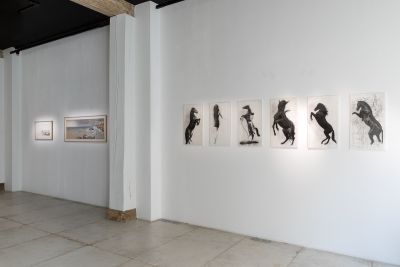 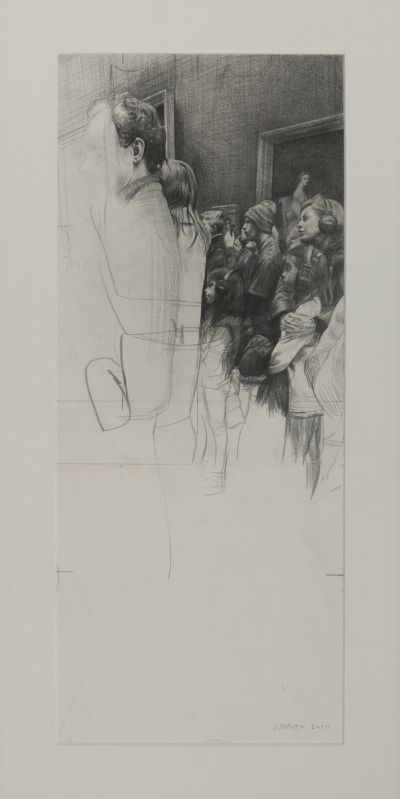 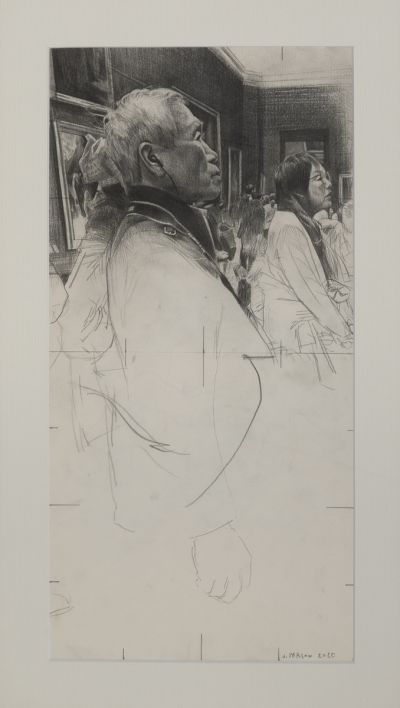 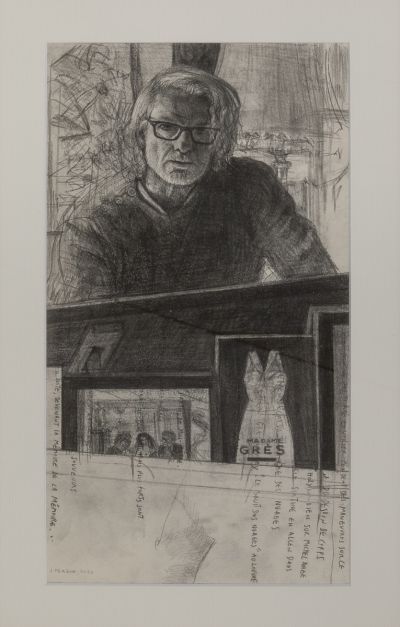 During his studies at the Ecole des Beaux-Arts in Paris, from which he graduated in 1986 with honours, Joël Person was able to perfect his drawing skills by observing live models. This concern to constantly deepen his eye and his technique remains intact today. No matter the themes of predilection that he tackles: horses, hair, bodies, portraits or scenes of everyday life, he applies the same rigor to his work and gives way to the sole requirement of an extremely precise rendering that is likely to bring out the very presence of the subject he is drawing.

Even at a very young age, drawing was the only way for Person to express himself, given his dyslexia, which made him unsuitable for an educational system that was essentially focused on learning abstract language forms. Drawing was his resilience, and his way of reappropriating a world that had escaped him.

By practicing live drawing since his childhood, Person has reached a perfection in his art that should, in no way, be confused with academism and the traps of a demonstrative virtuosity, having no other end than to impress an audience eager with a trompe-l'oeil. His practice of drawing has nothing to do with superfluous work or presumptuous play, rather his taste for realism responds to the imperious desire to capture the truth of the subject. Whether it is with the immense frescoes of galloping horses or the more modest drawings, Person immediately inscribes his work in the highest pictorial tradition inherited from the Renaissance, and that of the romanticism of Delacroix or Géricault.

Even when he is inspired by visuals taken from social networks - those of CRS, yellow waistcoats or migrants - Person reworks each of these images on the spot. The reworking through drawing then brings a striking "aesthetic added value." For example, the drawings of the CRS he is doing for Frédéric Pajak's next magazine reveals a dimension worthy of the SF universe of a RoboCop. In front of the drawings that Person has produced from internet images, we measure the abyss that separates the attention opened by the artist's gaze, pencil in hand, and this passive perception that feeds our addiction to social networks.

Person dreams of founding a school of drawing, like the "school of the gaze" instituted in Salzburg by Kokoschka after the Second World War. The ethics of his art remain faithful to Matisse's teaching, which attributes to the artist the role of undoing the veil of clichés that stands between our perception and reality. Like our relationship with animals, these ultimate figures of otherness that the artist admirably deconstructs in all his work, inviting us to rediscover these silent masters.

Since Freud, we know that great works of art often find their impetus from a childhood memory linked to an emotional content mixing desire and prohibition. Person attributes his fascination for the equestrian motif to his childhood encounter with a Chinese statuette of a Tang horse belonging to his mother, which he was strictly forbidden to touch. Through drawing, he quickly managed to take hold of this impulsive universe where woman and animal seemed intimately linked.

Thus, with regard to his series of charcoal drawings, the Robes Cabrées, we are reminded of Paul Valery's observation about Degas' drawings: "The horse walks on its toes. Four nails carry it. No animal holds on to the first dancer, the star of the corps de ballet, like a thoroughbred in perfect equilibrium, which the hand of the one who rides it seems to hold suspended, and which moves forward with a small step in the sun. Degas painted him with a verse; he said of him: Tout nerveusement nu dans sa robe de soie. "

By repeating a series of galloping horses, whose tight framing on the animal's chest accentuates the feeling of power and vitality, Person offers a masterpiece with Déferlante to the art of drawing. We find all the tension and eroticism of the bodies dear to the Romantics revisited by the rhythmic power of all-over. This work, whose black charcoal texture enhances the feeling of musical vitality experienced when contemplating it, bears witness to a limitless processual character. Indeed, by repeating these serial cavalcade motifs, the artist can multiply the dimension of his creation indefinitely, even to the point of envisaging the crazy dream of covering the Great Wall of China with them!

By decomposing drawing as a medium assigned to a certain function circumscribed to the space of a frame delimiting a sketch or a preparatory exercise, Person opens up a future for it that takes it beyond its traditional limits. Is it not the symbolic dimension of mythical and legendary horses - whether those of Neptune or of the Apocalypse - that run through history to signify the power of transport of which this animal has condensed the dreams? It is the strength of Person's work to carry us away with the only recourse of drawing towards the mystery of art, and his insatiable desire for elsewhere... 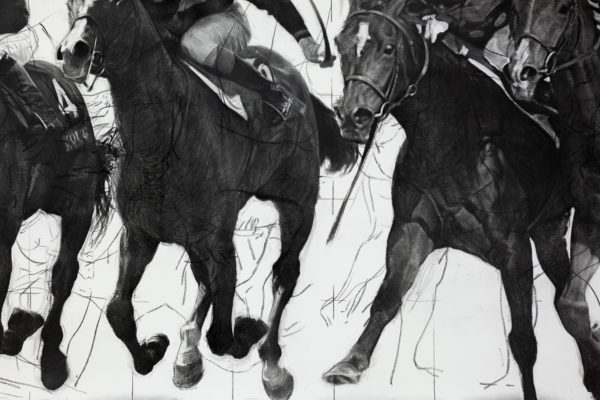 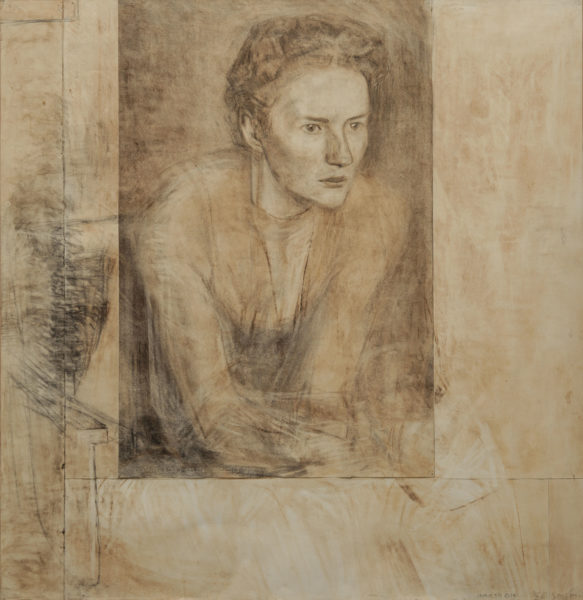 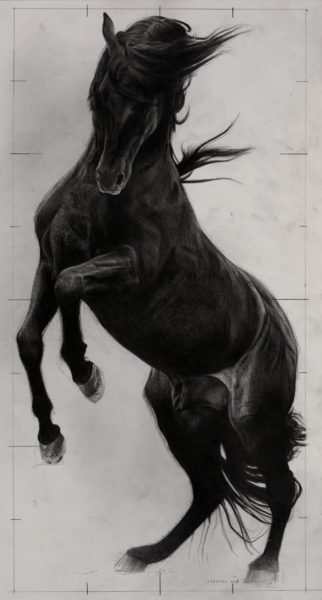