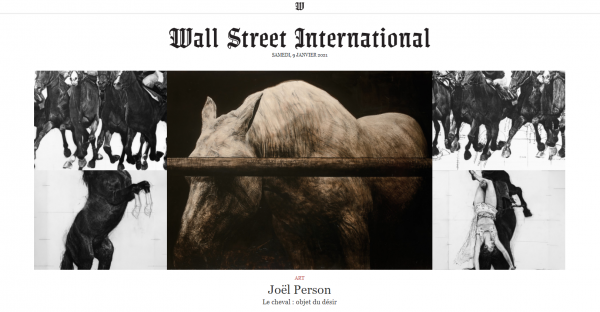 Link to the article (in French).

"Joël Person's drawings, as well as his work as a whole, are articulated in two stages, at the conjunction of two notions of history: the history of art and the intimate history of the artist.

His main artistic references, Delacroix, Géricault, impose themselves naturally with regard to the omnipresent motif in his work, the horse, linked to his childhood where the animal is the object of all the prohibitions and all the fears. First of all, a Chinese statuette of a Tang horse belonging to his mother, to be looked at from a distance, which he perceives as a living being that "pell-mell represented the forbidden, the transgression, the danger". On the other hand, a painting by Paul Magne de la Croix, an animal painter and ancestor of the artist, representing the torture of the Visigoth princess, Queen of the Franks, dragged naked by a galloping horse. Despite the violence of the scene, the presence of a form of sensuality is superimposed on his perception of the horse.

The drawing conjures up, in a way, the distance. The desire intervening in the field of the artistic creation, he does not have from then on to transgress the interdict by appropriating the figure of the horse by means of the traditional practice of the drawing with charcoal.

"Drawing is not the form, it is the means of seeing the form" according to Degas. This involves questioning the means inherent in the practice of drawing. What devices can bring a shape to light?

For Joël Person, before any figure appears, the support of the drawing, the sheet of paper, cannot be a blank surface. It is the object of inscription of various elements, drawings of nudes, annotations, mathematical formulas, which are superimposed forming a palimpsest.

This palimpsest plays the role of revealing the figure. It seems to emerge from this tangle of signs, a metaphor for the distance that the drawing abolishes.

He thus evokes this visible creative process as such: "For me, the horse is an impeded power, essentially prevented from doing. My drawing liberates it at the moment when I express myself my freedom in the drawing ".

Another device intended to create the intensity of a presence through a framing effect. The "Norman cob" also called "horse at the helm" is an example of this.

It is not surprising that Joël Person refers to Géricault's Tête de cheval blanc, a painting whose formal treatment leads to the constitution of a portrait.

It is the same for the composition of the "horse at the helm". Behind the figure, a black void of Caravaggesque depth, an unreal and abstract space. In front of her, a bar closes the space at eye level. The body of the horse takes place in this reduced space which emphasizes the power of its animality rendered by the work of the line that sculpts the figure. The bar, metaphor of the animal's confinement, also materializes the separation between the space of the drawing and that of the spectator. It induces the idea of inaccessibility in spite of the composition in tight plan, a form of presence/absence in which the animal refers to a figure of otherness that Joël Person evokes in this way: "What is the difference between him and me?".

Other drawings, on the other hand, establish a dynamization of the space. This is the case of the Horses of the Apocalypse with the dimensions of a cinema screen. Galloping horses, arranged all over, seem to be projected in front of the space and to go in front of us, in a flow of moving bodies. This is generated by the black texture of charcoal, which breathes intense vitality into the motif and models its power.

The constant attention paid to the play of light and shadow, between black, grey and white, is part of Joël Person's desire to make the figure of the horse appear in all possible forms.

In this, the drawings impose themselves by their plastic force.

Joël Person was born in 1962 in Abidjan, Ivory Coast. He lives and works in Paris.

In 2020, he has exhibited at the Bertrand Grimont Gallery in Paris, the Art Sablon Gallery in Brussels, the Conciergerie de Paris for the "Drawing Now" fair at the Haras du Pin.

The gallery Loo & Loo, 20 rue Notre Dame de Nazareth in Paris will devote a solo exhibition to him from March 30 to May 8, 2021. There will be exhibited in parallel with Horses, the series Noise of the World and Confinement.

His "portraits and self-portraits" will be shown at the Jenisch Museum in Vevey in the spring of 2021".