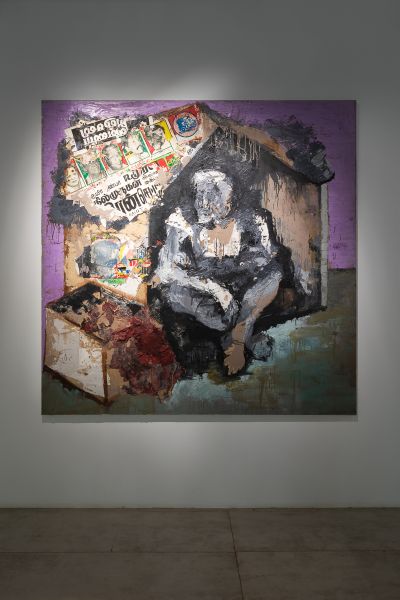 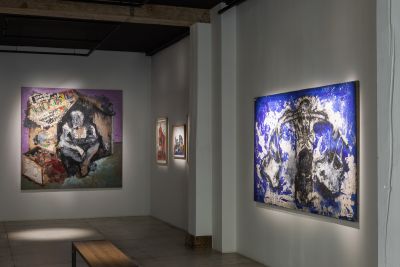 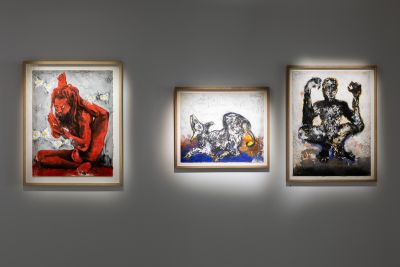 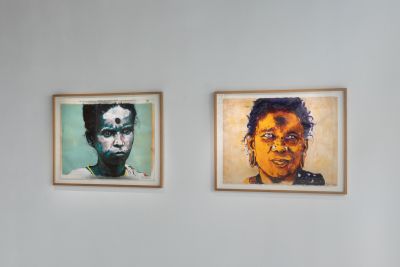 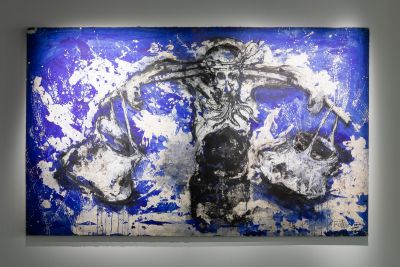 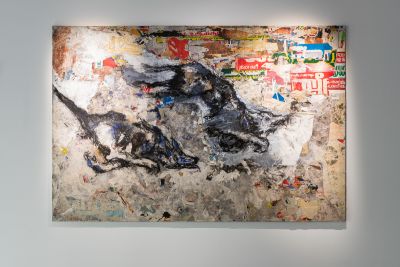 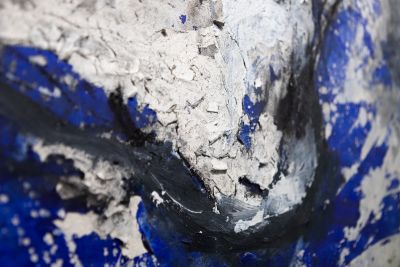 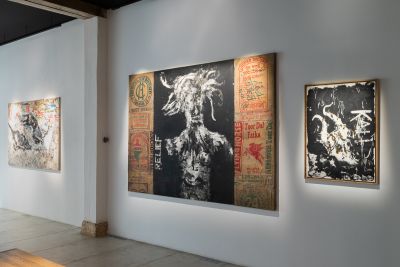 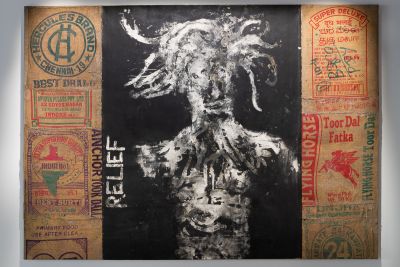 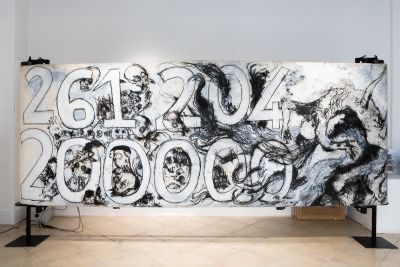 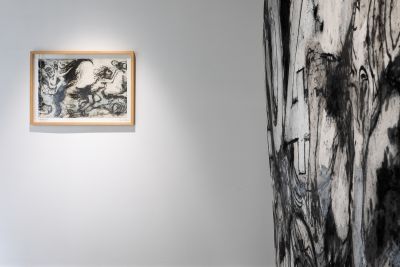 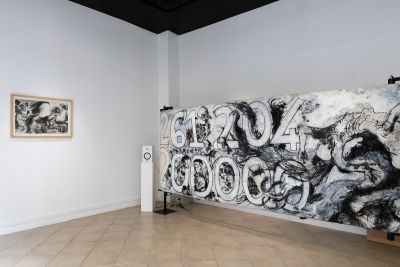 Paraphrasing the exergue of Nietzsche's book Human, All Too Human, one could say that Fred Kleinberg's work was made for free spirits, as the artist considers himself first and foremost a traveler... This is how he finds inspiration and the material for his pieces, and in this search he has also witnessed great contemporary tragedies. What Kleinberg seeks in this nomadic exploration is not only humanity and the exploration of other cultures, but also what philosopher Gilles Deleuze calls a "chaos-germ", from which a style can emerge..."

Some thirty works produced between 2000 and 2010 in India

From this point of view, Fred Kleinberg's Indian Years is not the travel diary of an artist in search of exoticism. Of the thirty or so works produced between 2000 and 2010 in India, we will not find the usual batch of images dear to tourist attractions, with its collection of sacred cows and the colourful abundance of women's saris. In 2004, while doing an artist's residency near Pondicherry, the painter had no idea that he was going to find himself at the heart of one of the most tragic natural disasters in history, in the face of which the torments of the shipwrecked Medusa or those of Jonah in the grip of divine wrath might seem like mere anecdotes. On December 26, an earthquake of rare violence provoked a tsunami that hit southern India. Among the rubble of his studio, which was completely destroyed, the artist found only a roll of paper returned by the sea, still bearing the scars of the tsunami's violence; this became the support for the testimony that the painter had given to this tragedy.

Fred Kleinberg responded to the anger of nature with the rage of expression by creating a fresco in situ, using black chalk, in a format that was equal to this extraordinary tragedy: over 18 metres long! As the artist learned about the victims he knew, he drew a picture, like a dazibao, which gradually unfolds. This all-over fresco becomes the real seismograph of the catastrophe the painter witnesses. Like an immense graphic wave carrying all the spectres of those who have been swept away, this monumental work constitutes a sublime replica, drawing the viewer into the feeling of dread and aesthetic delight dear to the Romantics. The flow of the sea meets the flow of the continuous drawing, the only way to render the tangled impressions and images carried by the power of the tsunami. By using exclusively black and white, the artist gives his work a dramatic tension that evokes the darkest pieces of Goya as much as Picasso's Guernica.

Fred Kleinberg's practice of painting is 'dialogic,' with an emphasis on listening, and a desire to connect with the communities in which he creates.

Most of the other works in the exhibition demonstrate the commitment of Kleinberg's art to a human adventure in which the artist engages in a "dialogical" practice of painting, emphasizing listening, and the desire to create links with the communities in which he creates.
Like the painting Relief, in which the formal questions and the choice of materials remain inseparable from the human experience that gave birth to them; the jute canvases with silk-screened motifs that frame the painting are cereal bag wrappers, recovered by the artist when he was distributing food with NGOs.
By integrating pieces of recovered posters into paintings such as Monbay Victoria terminus or La fuite, the painter also returns to a use of collage derived from Cubism, and suggests the impression of a world shattered in a string of coloured images. The use of the gum arabic technique for some of the works made in the wake of the tsunami, finally allows the artist to accentuate the spectral character of the painted figures. For it is the moods of flight, fear and survival that constitute the omnipresent affects of a majority of the pieces in the exhibition, uniting animal fear with human anguish in the same drama. Only the beautiful pastels of Sadhou figures or young girls, whose survivors from a world whose history seems to be a succession of atrocities, balance the impression of apocalypse that dominates this painting, a distant and noble descendant, no doubt, of a renewed romantic energy. 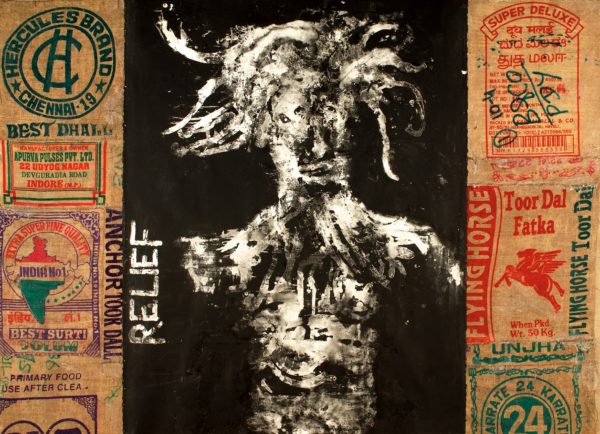 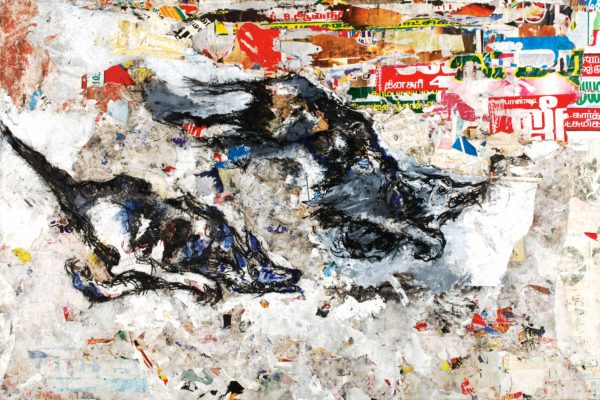 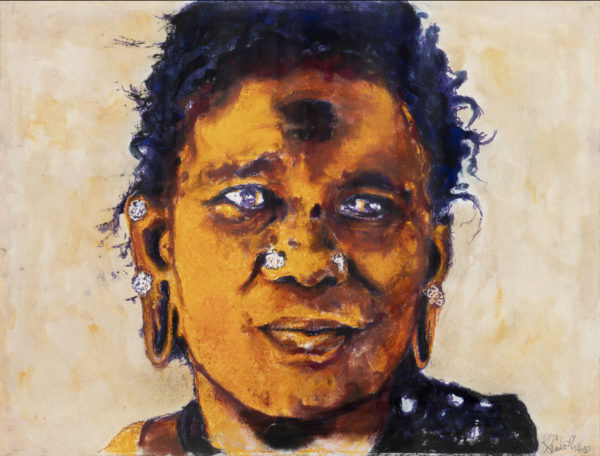 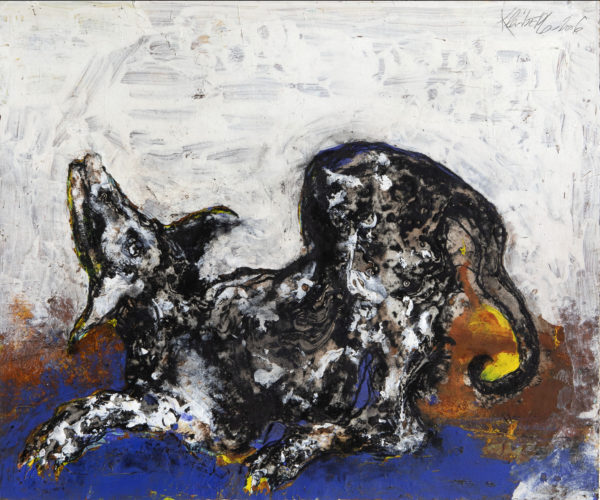