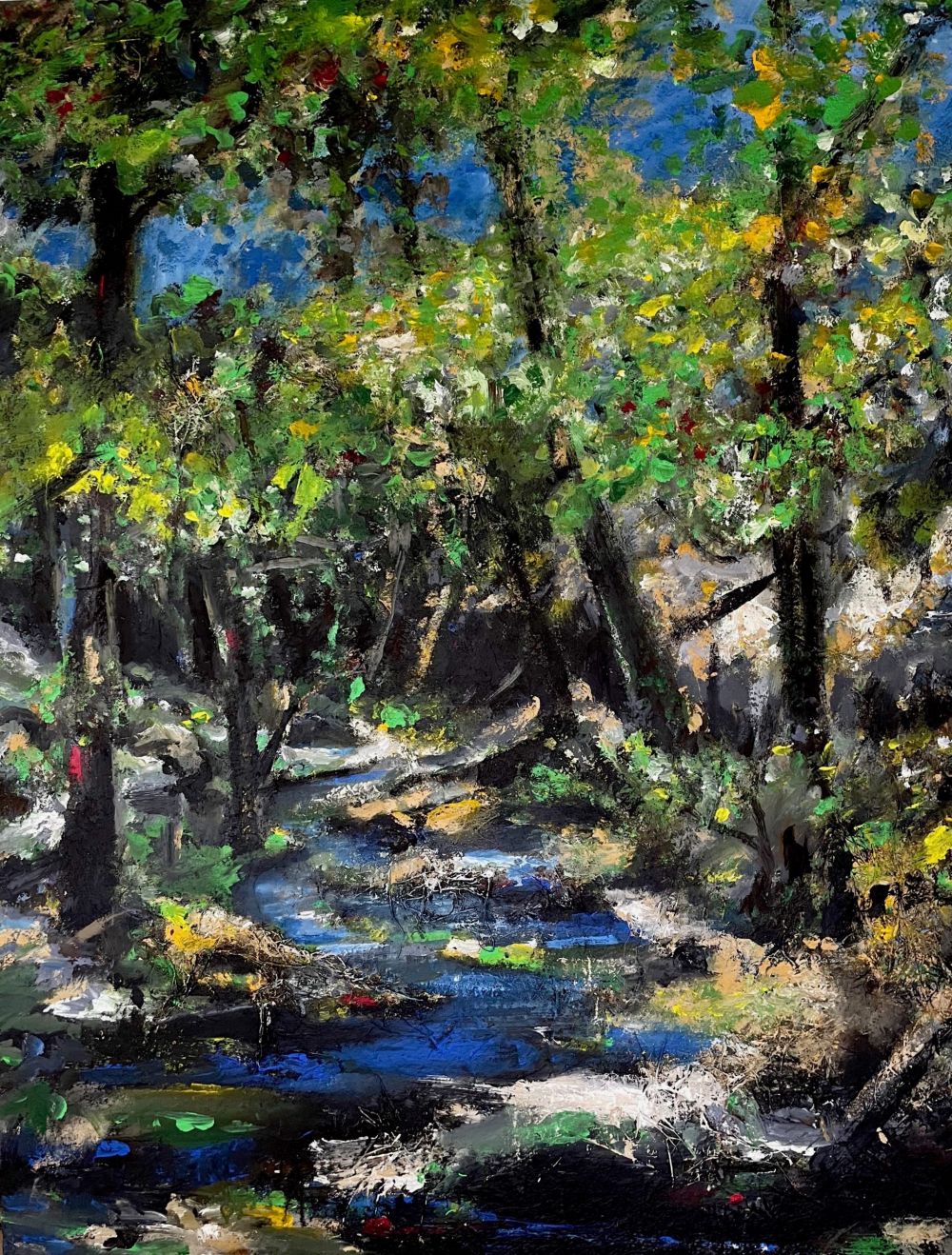 "For those unfamiliar with Olivier de Sagazan’s work, it can appear rather morbid and provocative at first glance. He sees his creations as a way to shake up our conscience and to underline the exceptional character of life.

For our first collaboration with the artist in 2016, we hosted his performance "Transfiguration" as a preamble to his exhibition. It consisted of a one man show, in which a man in a suit arrived on stage and gradually entered into a form of trance to disfigure himself, sometimes vociferating, and used clay and paint to cover his face and body.

This confrontation produced a certain effect on the public. After the performance, I still remember seeing some quasi-bloodless faces amongst our guests. A friend that I met in the crowd also seemed a bit shaken. He was not yet a collector of Sagazan's works (he would become one later on!), and his stance was rather reserved, not really knowing the nature of the feelings that ran through him. He really had to take the time to digest it, he told me...

As for me, at times I could not escape a sort of amazement from this character, the artist who had suddenly become unknown to me, transforming himself before our eyes. I had a confused feeling, without knowing precisely that something primordial had been elevated from this experience.

And yet, this was not unknown territory. During the preparation of the exhibition, we visited his "workshop-capharnaüm" in Saint Nazaire and discovered a plethora of creations which evoked a strange universe to me. Sculptures, paintings of bodies, and creatures shaped from the earth—a form of reinvented bestiary—were all over the studio…

The first feeling that came to me when my gaze landed on these disemboweled, bruised, flayed bodies, inevitably referred to a mortiferous feeling. Although, something else came to the fore almost immediately: a more poetic reading. Yes, they were damaged bodies, but they were also faces devoid of pain or sadness. His creatures seemed to freeze for eternity. Sagazan’s world was not so disturbing, and the slightly macabre impression from before was largely overcome.

As his next exhibition, Etre Chair, will confirm, after uprooting there is rooting, or at least an attempt to do so. The artist proposes a dialogue between his sculptures and a series of landscapes undertaken during Covid, a time when he felt the need to connect with nature even more strongly. The majority of his landscapes exclude the bodies that he used to include. With the notable exception, however, of a painting representing an undergrowth in which we see, connected, by the roots, a buried body that emerges on the surface."

Born in 1959 at Brazzaville in Congo, Olivier de Sagazan lives and works in Saint-Nazaire.

Trained as a biologist, he is interested in the living and, through his pieces, seeks to establish a sort of genealogy of the sensibility. He aims to better understand how, at some point, inert material structured by cells engenders life and sensitivity.

For about 25 years, Olivier de Sagazan’s work has principally revolved around the human body. In parallel with his creations - paintings, sculptures, installations - de Sagazan produces performances, popularly seen by the entire world, during which he utilizes his own body as a mold, with clay and paint as his mediums. Converting his face and body, he manoeuvers through choreographed gestures, alloting for radical metamorphoses.

The artist predominantly uses clay and plants that he gathers and kneads in order to create lifelike material. From these elements, a polymorphic world appears composed of different characters like a bestiary where humans intertwine with animals. 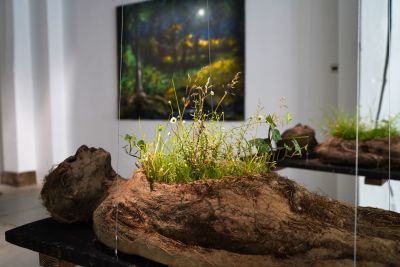 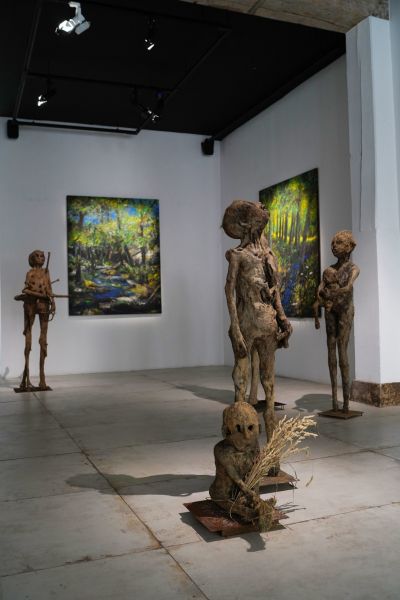 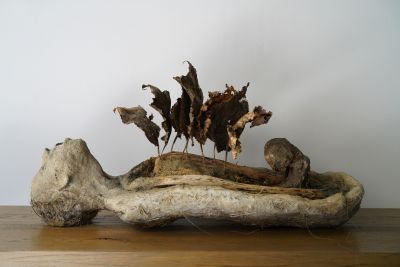 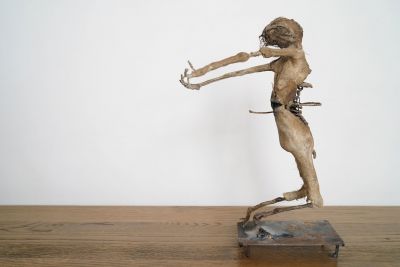 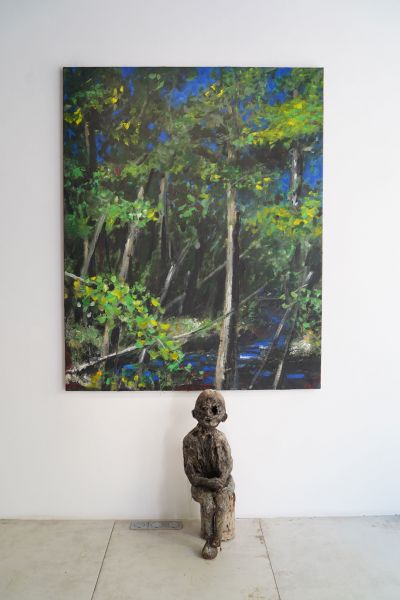 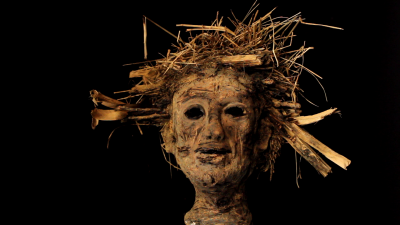 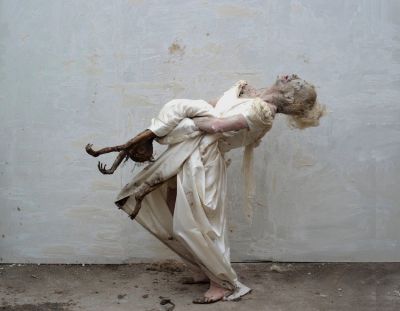 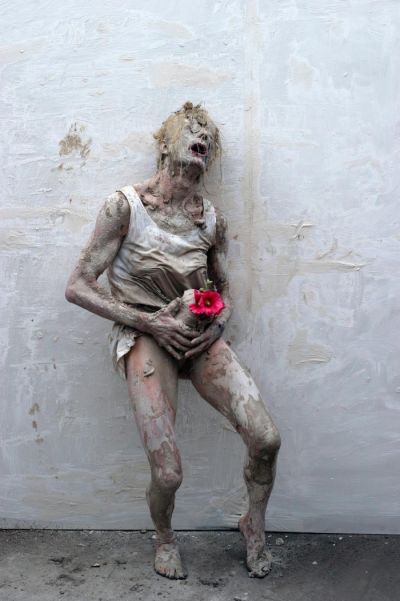 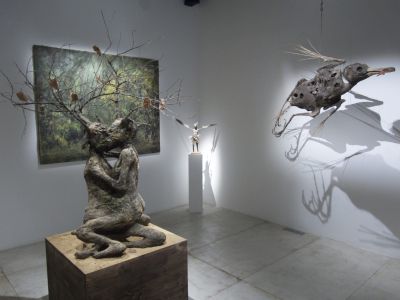 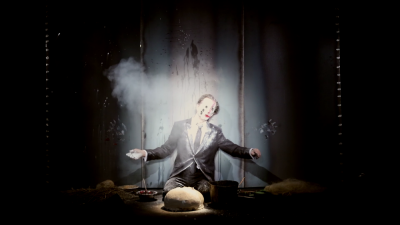 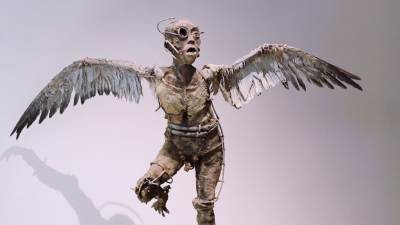